Book, Music and Lyrics by Jim Jacobs and Warren Casey ;

We will be returning to the Royal & Derngate with the full version of this great show in October 2016, with all of the hit songs from the movie.

Following on from the success of our last production, Sister Act, we now  present the cult classic, Grease, in the Derngate auditorium. Packed with all the hit songs from the film, including You’re The One That I Want, Summer Nights, Hopelessly Devoted To You, Greased Lightnin’ and many more, you are in for a rock ‘n’ rollin’ night out!

If you love Grease, the performance on Friday the 28th October will give you, our lovely audience, the chance to come along in your own Grease fancy dress!

Book your tickets while you can!

The performance on Wednesday the 26th will be presented with a Sign Language interpreter. 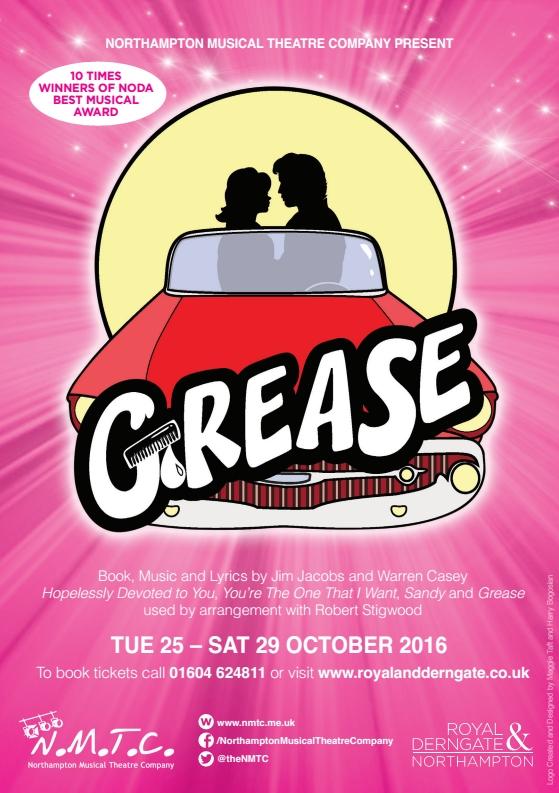 A super-cool, D.A.-haired, hard-looking group of high school wheeler-dealers… or so they think.

The Rest of Rydell High

Press Release: “Have a rock ‘n’ rollin’ night out with electrifyin’ musical Grease”

The original American high school musical, Grease is packed with all the hit songs from the blockbuster 1978 film, including You’re the One That I Want, Summer Nights, Hopelessly Devoted to You, Greased Lightnin’ and many more.

Audiences are in for a rock ‘n’ rollin’, hand-jivin’ night out as they enjoy the exploits of the T-Birds and the Pink Ladies, and find out whether new girl Sandy and bad boy Danny can overcome their differences and rekindle their summer romance.

With a special ‘dress up’ night on Friday 28 October, audiences are invited to dust off their leather jackets and fifties frocks, and join in the fun.

Established 118 years ago, the company, previously known as Northampton Amateur Operatic Company, are ten time winners of the “Best Musical” Award from the East Midlands region of the National Operatic and Dramatic Association. Peter Thorn, NMTC’s Business Manager, said “NMTC prides itself on their professional-quality productions, and this year promises to be one of the best.”

Grease takes to the Derngate stage from Tuesday 25 to Saturday 29October, with performances every evening at 7.30pm and a matinee at 2.30pm on Saturday. Tickets are priced from £10 to £22* with concession rates and group discounts available. For more details and to book tickets call Box Office on 01604 624811 or visit www.royalandderngate.co.uk.

* A charge of £3 applies for all transactions over £15. Does not apply to Groups, Friends or Disabled Patrons, and is per-transaction, not per-ticket.

They’ve found “The one that they want”!

Local men found for production of Grease at the Royal & Derngate this October!

The Northampton Musical Theatre Company are bringing the smash hit musical Grease to the Derngate stage later this year and have successfully bolstered the numbers of men in their company. The musical, made famous by the 1978 John Travolta movie, contains all the hit songs; including You’re The One That I Want, Summer Nights, Hopelessly Devoted To You, and of course Greased Lightnin’, as well as many more.

“Following on from our amazing success of Sister Act last year, we’re delighted to be performing this cult classic back on the Derngate stage” said Pete Thorn, the company’s Social Manager. “Sister Act was perfect for us as we, like so many other companies, are a majority female cast – Grease on the other hand needs 6 strong young male leads to fill the ranks of the T-Birds and they need to be able to hold their own against the Pink Ladies! The leads for the show need to be able to appear between 16 and 20(ish) years old – though we do have a wonderful make up team!”

The two romantic leads, Danny, as iconically played by John Travolta, is a well-built, good-looking confident young man, with a cool air of easygoing charm. Sandy, the love interest made famous by Olivia Newton John, is a sweet but naïve, young woman, who’s wholesome nature rings bells of “Sandra Dee”.

NMTC are an award winning local company whose Sister Act has just won the East Midland’s NODA award for ‘Best Show’, which is the company’s 12th! The company are proud of their high production values: “Sister Act cost us £70,000 to put on, the only people that didn’t get paid were the cast their selves!” said Pete, “We hire professional staging, lighting, crew and our orchestra is made up of some of the county’s finest”. A review of their last production, by Northampton’s own @asmallmindsummed them up well “[The NMTC’s] Sister Act is epic. [They are] busy breaking all the rules of an ‘amateur’ production.”

Grease has recently had a mini-revival in the form of a live television production. It starred Disney’s Vanessa Hudgens in the role of Rizzo, with Jessie J singing the title track, as well as two of the 1978 movie cast taking on older roles this time around.